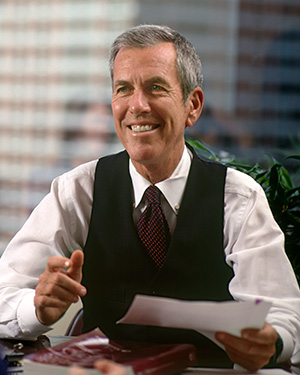 Don graduated from Rice University, earning a degree in Accounting and Economics in 1964 while playing on the Rice University golf team. He then went on to obtain his law degree from the University of Texas School of Law in 1968. After law school, Don joined the law firm of Fulbright & Jaworski in Houston. It was at Fulbright & Jaworski that he began his illustrious career in estate planning and probate. Don became a partner there in 1975. In 1979, Don helped establish the law firm that is now known as FizerBeck. During his forty years of legal practice, Don became one of the premiere estate planning lawyers in Texas. Don was a valued and beloved counselor to countless families and individuals. As a frequent lecturer and teacher, Don made substantial contributions to the State Bar of Texas and other professional organizations. Because of Don's patience, wisdom, and generosity, many people consider him to be their greatest mentor. He fully retired from the practice of law in 2008.

An avid hiker, Don often traveled to the Rocky Mountains and Costa Rica, documenting his journeys through photography. In his forties, Don took up running, a passion that resulted in the completion of forty-eight marathons. A wine connoisseur, Don was a member of the International Wine & Food Society. Illustrating his competitive spirit, Don achieved the level of Master in bridge. An ardent sports fan, Don supported the Rice Owls' football and baseball programs and participated in professional horse racing. He was also an active member of Braeburn Country Club, where he played golf.

Don was a member of Chapelwood United Methodist Church. Don also spent time volunteering. He chaired the John J. Eikenburg Law Week Fun Run for the Houston Bar Association for several years. As a Houston Marathon participant, he was frequently one of the highest fundraisers for the Leukemia and Lymphoma Society. In addition, he served on various charitable boards, including the G. Harold & Leila Y. Mathers Foundation, New York.